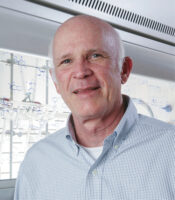 Houston, TX – October 8, 2020 – The Welch Foundation, one of the nation’s largest sources of private funding for basic chemical research, has announced that Dr. Steven L. McKnight is the 2020 recipient of the prestigious Robert A. Welch Award in Chemistry. Dr. McKnight is a highly-respected and influential leader who has made numerous discoveries in the fields of chemistry and biology that have benefited humankind. With this award, he is being recognized for his original contributions that identified the regulatory regions of eukaryotic genes, gene specific transcription factors, and the role of low complexity sequences in proteins that form functional and reversible aggregates in phase-separated hydrogels.

“Dr. McKnight’s lifelong work is nothing short of creative and brilliant, and very much in line with the mission of The Welch Foundation, to improve the lives of others through the advancement of chemical research,” said Carin Barth, Chair and Director, The Welch Foundation Board of Directors. “Not only has he made revolutionary advances in chemistry and biology, but he is also well-known for his collaborative leadership in the scientific community.”

Dr. McKnight is the Distinguished Chair in Basic Biomedical Research at The University of Texas Southwestern Medical Center. Much of his work has focused on the physical, structural and biochemical aspects of gene transcription. His early work in the 1980’s resulted in the development of linker scanning mutagenesis, a method to identify the regulatory regions of eukaryotic genes which was widely used for many years. Upon using this method, he later identified, purified and characterized the CCAAT/Enhancer Binding Protein and then discovered the leucine zipper, a protein dimerization domain required for the DNA binding activity of many eukaryotic transcription factors. Among his more recent work, he discovered that low complexity sequences in proteins can cause those proteins to form functional aggregates that concentrate active molecules in phase-separated protein condensates and hydrogels.

“Steve McKnight has done creative and breakthrough science for decades,” said Peter B. Dervan, Chair, The Welch Foundation Scientific Advisory Board. “Throughout his 45-year career, he has used molecular, biochemical and biophysical methods to study regulatory pathways.  These findings provided the initial conceptual framework for understanding how combinatorial models of DNA regulatory proteins generate the complex patterns of gene expression required for growth and development.  In the most recent phase of his career, McKnight traced the molecular basis of the self-association of many proteins to phase separate without membranes as a means of controlling dynamic aspects of cell organization.”

Dr. McKnight received a bachelor’s degree in biology from the University of Texas, and his Ph.D. in Biology from the University of Virginia. He conducted postdoctoral research at the Carnegie Institution of Washington and was appointed as a staff member in 1983. He became a Howard Hughes Medical Institute investigator in 1988. In 1991 Dr. McKnight left academia to co-found Tularik, a San Francisco-based biotechnology company devoted to the discovery of ethical drugs acting to treat disease state via the regulation of gene expression. In 1995 Dr. McKnight joined the faculty of UT Southwestern Medical Center and became the Chairman of the Department of Biochemistry  in 1996, a position he held until 2017. As Chairman, he guided the Department to international prominence in the disciplines of chemistry and biochemistry. He also directed a productive research program in his laboratory, which he continues to do today.

The purpose of the Robert A. Welch Award is to foster and encourage basic chemical research and to recognize, in a substantial manner, the value of chemical research contributions for the benefit of humankind as set forth in the will of Robert Alonzo Welch. Upon accepting the award, Dr. McKnight will receive $500,000 and a gold medallion.

Since 1954, the Houston-based Welch Foundation has contributed more than $1 billion to the advancement of chemistry through research grants, departmental research grants, endowed chairs and support for other chemistry-related programs in Texas. For more information on the Foundation and a list of previous Welch Award recipients, please visit www.welch1.org.