The Welch Foundation is honored to announce the 2018 Robert A. Welch Award in Chemistry Recipient 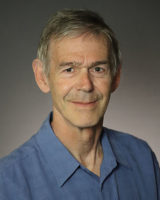 The Welch Foundation Announces Dr. Adriaan Bax as 2018 Welch Award Recipient
NIH researcher’s development of novel methods in structure determination has led to important advances in our basic understanding of how biological systems work at the molecular level

Houston, TX – September 11, 2018 – The Welch Foundation today announced Dr. Adriaan Bax as the 2018 recipient of the Robert A. Welch Award in Chemistry. Dr. Bax is responsible for transforming nuclear magnetic resonance (NMR) spectroscopy into a powerful and widely used tool for the study of the structure, function and dynamics of biological macromolecules.

“Dr. Bax introduced many of the NMR advances that are now used in thousands of chemistry and biology laboratories on a daily basis,” said Carin Barth, Chair and Director, The Welch Foundation Board of Directors. “His ideas have transformed NMR, structural biology and molecular biophysics.”

Dr. Bax is a National Institutes of Health Distinguished Investigator in the Laboratory of Chemical Physics at the National Institute of Diabetes and Digestive and Kidney Diseases. The focus of Bax’s early work was on the development of novel multi-dimensional NMR experiments that have become a cornerstone of chemical analysis.  He then introduced the now widely adopted NMR approach that relies on stable isotopes to unravel the complexity that plagued earlier NMR studies of biological macromolecules. Subsequently, Bax altered the course of biological NMR again. By dissolving proteins in a dilute aqueous liquid crystalline suspension, he made it possible to precisely measure the orientations of chemical bonds, thus providing a far sharper view of protein structure and motions.

“Ad Bax made it possible to move the field from static structures to movies of biomolecules in functional action,” said Peter B. Dervan, Chair, The Welch Foundation Scientific Advisory Board.

Researchers have long wanted to better understand the way an unfolded protein chain reaches its final folded structure. Recently, Bax and coworkers at NIH opened a new window on the process by allowing NMR to follow protein folding at an atomic level in real time. Dervan adds, “The methodology makes it possible to determine high-resolution structures of folding intermediates and to study disease related events such as protein aggregation and fibril formation. The importance of the work to human health is clear when one considers the significance of protein misfolding diseases and the importance of developing techniques capable of dissecting misfolding pathways.”

The purpose of the Welch Award is to foster and encourage basic chemical research and to recognize, in a substantial manner, the value of chemical research contributions for the benefit of humankind as set forth in the will of Robert Alonzo Welch. Upon accepting the award, Dr. Bax will receive $500,000.

The Welch Foundation, based in Houston, is one of America’s largest private funding sources for basic chemical research.  Since 1954, the organization has contributed almost $900 million to the advancement of chemistry through research grants, departmental grants, endowed chairs and support for other chemistry-related programs in Texas. In addition to the Welch Award, The Welch Foundation presents the Norman Hackerman Award in Chemical Research, recognizing the accomplishments of chemical scientists in Texas who are early in their careers. Each year, the foundation hosts the Welch Conference on Chemical Research in Houston, drawing leading scientists from around the world to explore state-of-the-art research in various areas of chemistry.

For more information on the Foundation and a list of previous Welch Award recipients, please visit www.welch1.org.